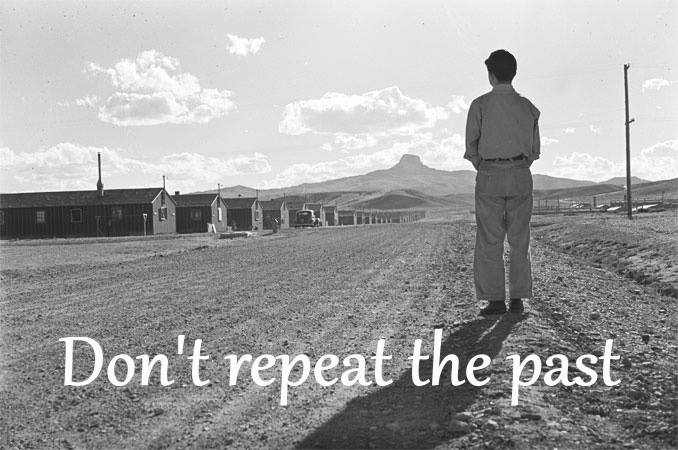 Our past is already tainted with the dark history of the Heart Mountain internment camps. We cannot make the mistake of repeating the atrocities of the past.

After Pearl Harbor, newspapers and government officials used slurs to paint Japanese Americans as disloyal, dangerous and as the other which is parallel to what is happening currently. Later they used doublespeak like “evacuation” and “relocation” to disguise the true nature of what was happening. These words suggested that the forced removal of American citizens was for their safety and protection—rather than the exile and imprisonment that it really was. Today we here things like detention centers are essentially summer camps.

When the camp was at its largest, it held more than 10,000 people, making it the third largest town in the state. The relocation of Japanese Americans was not popular with many living near the potential confinement sites. In Wyoming, Gov. Nels Smith warned that the state “will not stand for being California’s dumping ground.” Smith said that the Japanese should be kept under armed guard “and be removed at the end of the emergency.” While some in Wyoming, like Powell Tribune editor Raymond Baird, welcomed the additional laborers the camp would bring to the region, many viewed the project instead as a necessary in support of national security.

During the draft at Heart Mountain, a group called the Fair Play Committee advocated for civil disobedience. They refused to report for pre-draft physicals and were charged in a federal court. In all, 63 individuals were tried in Cheyenne for draft evasion which was the largest mass trial in Wyoming history.

We were wrong for allowing this to happen here in Wyoming and with the news that has been coming out of detention centers we cannot repeat the past.

This year Tsuru for Solidarity joined us at this year’s Fiesta de Familia and stood with us in solidarity. We are very grateful and proud to have allies working toward the same goal of ending detention and defending immigrants. Tsuru for Solidarity’s website says:

“It is impossible to quantify the losses of family, friends, and community incurred from this mass incarceration, or the toll this trauma took on Japanese American prisoners’ mental and physical health. The Japanese American community endured all of this due to the United States’ racism and “war hysteria” that made the camps a reality in the first place. This pain of family and community fracturing is our lived experience, history, and inheritance. We know what happens when people are rounded up and imprisoned in “detention centers.” We speak from our past with all the weight of our community’s experience to say: stop repeating history. “

Uinta County residents opposed to the proposed immigration prison are asking for your support in saying NO – please sign the petition now!